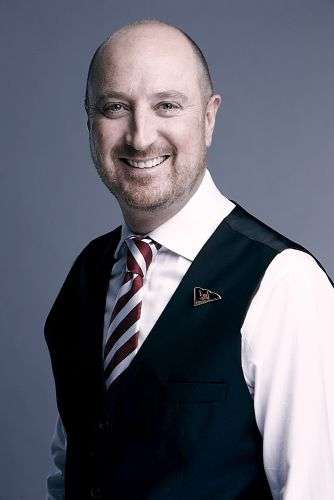 Al Prodgers is sought after as a leadership and talent developer whose strategic focus is constructive conversations and spontaneous speaking.

His style is interactive,  and filled with genuine warmth towards his audiences.

His positive, proudly South African message of embracing change and building relationships will boost and motivate your audience while they laugh. By growing empathy between diverse groups of people, his comedy can improve workplace relationships and teamwork. Al is now available to book through Speakers Inc.

Al Prodgers is a highly sought after MC, specialising in the subtle art of making the client the star of the show. For more than two decades he has worked as a highly respected Stand-Up Comedian, MC and Comedy Improviser, entertaining audiences locally and internationally from Toronto, London, Dubai and across Africa including Uganda, Zambia and The Seychelles.

Having completed a prestigious Bachelor of Arts Degree and a Performer’s Diploma in Speech and Drama at the University of Cape Town, Al Prodgers began his career as an actor and scriptwriter. You may have seen Al appear in famous TV series like Generations, Isidingo and Wild At Heart amongst many others. After years of experience in TV, film and theatre he became one the pioneers of modern Stand-Up Comedy in South Africa.

He utilises these skills to maximise your company’s messaging throughout his performances. If you missed him as a grand finalist in the international comedy competition, “Yuk Yuks Great Canadian Laugh Off”, you can see him as the host of his own special on Comedy Central.

Otherwise Al is often on stage at comedy clubs throughout South Africa, constantly working on fresh material in front of a live audience. Like any comedy, it’s best said live..

He teaches dynamic professionals how to master communication under pressure, instilling confidence and self-mastery, and equipping them with simple, easily applicable tools to succeed when uncertainty strikes.

His Constructive Conversations toolkit shows your team how to avoid the pitfalls of individual ego, gives a method to stay focussed on the common goals and helps the group capture results quickly and easily.

Backed by years of comedy experience, his delivery is light-hearted, positive and affirming. He packs his keynotes with audience interaction which energise and encourage people to achieve their individual and collective potential in a safe environment.

Al’s audiences have praised the warmth and human style with which he delivers his message. They have remarked that the principles are equally applicable when it comes to better personal relationships.

He is an agent of change, an influencer and dynamic speaker who captivates the attention of the room and motivates action.

Book Al Prodgers as a Keynote speaker for your next conference and Al will add value as a hugely
experienced MC to seamlessly pilot the day’s events. Watch the champion of personal potential ignite your audience’s passion and energy into roaring fires.

“The anecdotal feedback we received was very positive. The mood in the room shifted as delegates started to appreciate the value of having up-building conversations. It was a positive experience and I believe delegates left with a fresh appreciation for the power of embracing/receiving feedback in a constructive way.”
Michelle Marsh, Field Communications Manager, KFC

“Job well done as always. The value you added was amazing, and client also commented. Once again thanks for everything.”
Nash Zwambila, Head of Events, Riverbed

“Thank you so much for being part of our event. It really was insightful and our employees enjoyed your talk thoroughly.”
Susan Huyser, Nestle

“This is a skill that everyone needs in their career – no matter where you are or what you’re doing”. Helen Nicholson, The Networking Company

“A perfect balance of insight, engagement, introspection & fun. The outcome is a deeper understanding of how to be a more effective communicator and a more respectful listener.” Vivienne Bezuidenhout, Executive Creative Director, Wildfire

“We were only exposed to one session with Al, his session was fun and interesting. It was very well researched.”

“Awesome people, all of you. Love the energy and passion.”

“Very knowledgeable and comes across as a specialist in his role. Someone who is passionate about what he does and an ambassador for being professional.”

“You were World Class!”

Al was superb. The client was extremely happy and so was I. He handled the whole evening very professional and made everything come together. I will highly recommend Al for his MC and his show. He really did an outstanding job!

“To find an MC that appeals to such a diverse group of people is not easy, yet Al seemed to manage this demanding task with ease. He kept everyone at our annual awards evening engaged throughout. We received numerous compliments from our staff during and after the function, and many remarked how impressed they were with Al’s professionalism combined with an amazing ability to keep the energy level high and entertaining. Thank you, Al, for both sticking to our brief and adding your own touch of flair to the event!
3M South Africa”

“It was a real pleasure to work with Al once again. Our corporate show was complex and relied heavily on Al as MC not only to follow script, but also to use his initiative and experience to improvise where necessary. Al brought the necessary gravitas to the event while still infusing the running order with the required amount light hearted comedy. Al was prepared and punctual, a true performer that I would recommend to others.” “Loved how seriously he takes his preparation. He really tries to get to know the client and the reason for their function. I liked that he could be honest with us when he thought our ideas might not work.” We appreciated how he really took on the role we had assigned him – he completely embodied the character. He is a total professional, understanding the process and making allowances for change at the last minute. I unreservedly recommend Al Prodgers!
Campbell & Campbell for PG Bison

Are you a Victim of Negativity?