Having spent over ten years in the business, he has performed on various stages around the world from New York to London, Toronto to Kigali, Nairobi, Gaborone, Harare and of course, everywhere in South Africa!

Having garnered close to 50 000 Twitter followers from his comedic endeavors, David is widely known and he continues to thrill the different kinds of audiences where ever he goes.

Seen weekly on eTV’s twice-Emmy nominated comedy show, ‘Late Night News with Loyiso Gola’, (now in its 12th season), David has the opportunity to showcase his talents to a weekly audience of more than 800 000 viewers.

Hailing from Uganda and a graduated Finance Honors student from Wits University, Dave has a unique brand of humor that combines wit and intellect without losing touch with his audiences.

Equally comfortable MC’ing or performing at any event, David’s corporate clients have included: 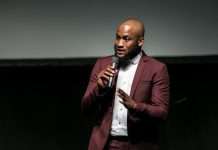