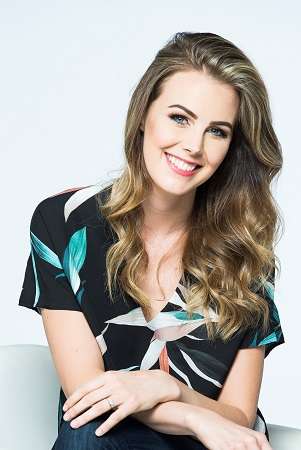 Elma Smit – Sports MC is one South Africa’s most versatile media professionals, a young woman who comfortably holds her own in an all-male sporting environment.

Elam Smit facilitates everything from intimate conversations, motivational talks at company-level and award shows for national broadcast with grace and ease.
She creates custom, conversation-driven content for your event and is particularly passionate about media training, the power of sport and women’s rights.

She brings with her a warm personable presence, a wealth of experience in hosting radio as well as TV, producing and writing (in English as well as Afrikaans). The same effortless glamour that set her apart as a sought-after model in her early twenties, is now her hallmark in the male-dominated world of sport. Elma now available through Speakers Inc

At the age of 25 Elma became the first woman to report on the Rugby World Cup for SuperSport and since 2011 she has established herself as one of the leading women in South African rugby. In addition to anchoring rugby magazine shows and pitch-side broadcasts for SuperSport, she is also a leading personality on JacarandaFM’s breakfast show, where she anchors the morning sport alongside Martin Bester & traffic anchor, Liesl Laurie.

While she is perhaps best known as the first lady of rugby, Lady Rugga, she also rose to fame for chairing discussion panels and providing plenty of business and current affairs coverage on kykNET’s immensely popular breakfast show Dagbreek alongside broadcasting legend Riaan Cruywagen. Follow Elma on Twitter.
Elma Smit – Sports MC cut her teeth in TV as anchor of the flagship live music and entertainment show Studio1 on the erstwhile youth channel MK and spent 8 years at entertainment powerhouse 5FM as executive producer, DJ as well as presenter.

In addition to an array of corporate MC gigs, Elma has also proven her mettle as anchor or co-anchor of live award shows for broadcast, such as five SARU Player of the Year Gala dinners, the Chris Burger Petro Jackson Fund Gala Dinner, the Pendoring Toekennings, the Ghoema’s, the SAMA’s and 6 editions of the annual MK Awards.

Her work for MyPlayers included conceptualising and anchoring a rugby show which showed viewers the homes, culinary skills and backgrounds of their favourite rugby players on two seasons of the lifestyle show Buite Die Lyne for lifestyle channel Via.

Not only did Elma Smit conceptualise the celebrated BrightRock Players Choice Awards in 2017, she also served as creative and commercial director for this prestigious event that was nominated for two Discovery Sports Industry Awards.

As influencer, Elma Smit – Sports MC has collaborated with, among others, Sanlam, Pringles, Vodacom and Elizabeth Arden on original, personality driven online campaigns.
She is an ambassador for Tag Heuer in South Africa, as well as leading South African brands Kingsley Heath, Gary Rom and pHFormula.

Elma was amazing, the group loved her zest for life and energy.

She is intelligent, witty  and engages and interacts well with people.

Working together  with Elma over four days was a pleasure with her delivering on all occasions.