Jonathan Kaplan – Motivational Dinner Speaker was born in Durban in 1966, the eldest of three brothers, he went to Carmel College and finished his schooling at King David Linksfield in 1984, with two distinctions.

He did National Service in Pretoria for two years. Afterwards, he studied at UCT from 1987 – 1990 with a B.Soc.Sci (majoring in Economics and Psychology).

He did a post-graduate Diploma in Marketing Management with UNISA in 1990. Now available through Speakers Inc

He has refereed 107 Super Rugby games (a record), including 3 Finals
He has refereed 425 first class games (a world record)
He is the longest serving member on the SA National Panels – 21 years
The SA Referee of the Year (5 times)

His role at SA Rugby was that of a professional referee. His main responsibilities (outside of that), was to work with the Super Rugby franchises (in his case, predominantly the Stormers) and to promote the next tier of younger referees by acting as their coach / mentor.

He sees himself as a strategic independent thinker, who has a very good understanding of the high performance realm of the rugby union. He is proud of the road which he has walked and he has absolute integrity.

Jonathan has a firm ‘no-nonsense’ manner with good people skills and an empathetic ear. He has great communication skills and given the time, he can often get the best out of people.

He has been involved of at all levels of the game for three decades and in the future, he see himself in a realm which promotes the best interests of the game.

Jonathan Kaplan – Motivational Dinner Speaker is a free thinker and he is keen to get involved in any project or organisation which has the capacity to enhance the mechanics of the operational side of the game, as well as the strategic aspirations of the main stakeholders.

He has just bought out his book, ‘Call it like it is’, which became a best-seller in 10 days of it’s release. He has published another book recently, called ‘Always Believe in Magic’ which he wrote in conjunction with Professor Tim Noakes and Kevin Musikanth, which has also earned the status of a best-seller. 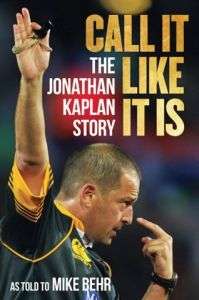