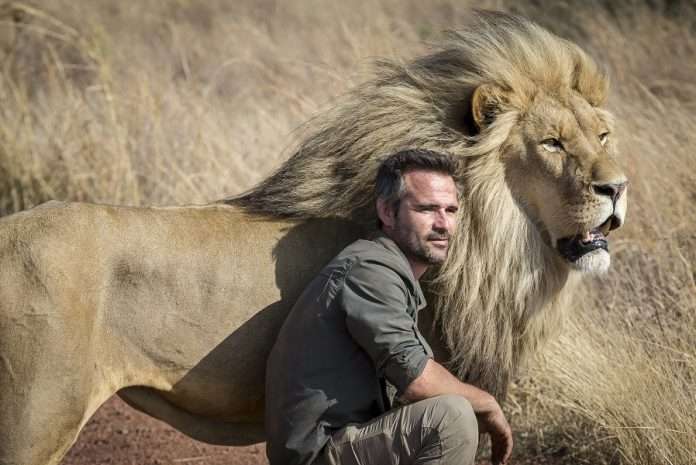 Kevin Richardson – Wildlife Speaker As a self-taught animal behaviorist, Richardson has broken every safety rule known to humans when working with these wild animals.

Flouting common misconceptions that breaking an animal’s spirit with sticks and chains is the best way to subdue them, he uses love, understanding and trust to develop personal bonds with them. His unique method of getting to know their individual personalities, what makes each of them angry, happy, upset, or irritated-just like a mother understands a child-has caused them to accept him like one of their own into their fold. Book through Speakers Inc

Kevin has used his unique relationship with these large predators to make documentaries and commercials while working at the Lion Park in Johannesburg, South Africa. It was there that award winning documentary maker Michael Rosenberg spotted Kevin’s unusual abilities and decided to capture these special relationships on film which kick started off Kevin’s documentary making career with Dangerous Companions, and other shows like Growing up hyena.

Kevin’s has been involved in various conservation and research projects in the Okavango Delta and Lydenberg area and as a result has produced another documentary on black leopard called In Search of a Legend. Follow Kevin on Facebook

The filming work Kevin has been involved in over the years has grown and as a result he has moved with the animals he works with to a larger farm nestled just outside the Cradle of Human Kind 50-60km North of Johannesburg called the Kingdom of the White Lion. He resides opposite the property where the animals are kept, and works closely with them on a daily basis.

It is here he has been working on the dramatic feature film called White Lion, a project in the making for 4 years. The film is soon to be released on the 19th of February 2010 in South Africa and details the life of a young white lion, “Letsatsi”, who against all odds survives to become the magnificent adult white lion he was born to be.

Kevin is a perfect speaker for your conference r event as a Motivational and Inspirational Speaker.

He is world renowned as the LION WISHPERER

About a year ago, film started to circulate on YouTube® of a remarkable man named Kevin Richardson, an animal custodian in a South African animal park.

The film showed Richardson in his day-to-day work, looking some of the world’s most dangerous animals directly in the eye, crouching down at their level, playing with them and, sometimes, even kissing them on the nose–all without ever being attacked or injured.  The films’ popularity skyrocketed and Richardson became an international sensation.

In “Part of the Pride”, Kevin Richardson tells the story of his life and work, how he grew from a young boy who cared for so many animals that he was called “The Bird Man of Orange Grove” to an adolescent who ran wild and, finally, to a man who is able to cross the divide between humans and predators.  As a self-taught animal behaviorist, Richardson has broken every safety rule known to humans when working with these wild animals.