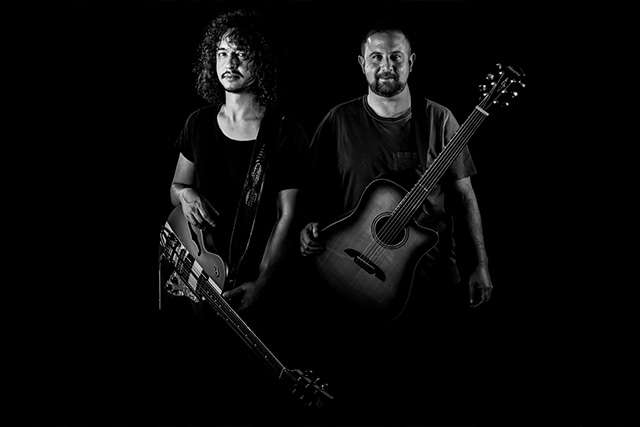 Me and Mr Green is the brainchild of Dan Green who, after nine years of leading the successful Me and Mr Brown decided that a change and a freshen up was required to once more take the party circuit by storm.

Me and Mr Green bring the very best party music from previous decades right through to the present day and never fail to create an amazing atmosphere at your event.

With over 700 weddings and countless corporates, festivals and birthdays under his belt, Dan has teamed up with Jeandre – an incredible guitarist and a massive bundle of energy, to create the perfect team.  Me and Mr Green are guaranteed to get the party started and keep it there!

Hailing from London, Daniel took the plunge and moved down to South Africa in April 2007 and loved it so much that he decided to stay! Dan has music in his blood. His younger brother Jon is a major song writer based out of Nashville and London, writing hits for a load of major artists including Linkin Park, Lady Antebellum and James Bay. Having been trained on the drums since the age of seven, Daniel has been playing in bands as long as he can remember, performing all over his native London as well as accumulating a whole host of recording experiences in some of the country’s finest studios including Abbey road and Air Studios. Having graduated with a History degree from University, Dan went into the travel industry where he remained for over a decade before moving south. He began strumming his guitar again for fun once settled in South Africa, commencing a journey which now sees him as one half of one of South Africa’s best Live party cover bands. Daniel is an avid Arsenal fan, a lover of fine wine and food and lives in Noordhoek with his wife Lindi and their three children Charlie, Daisy and Liv as well as their two dogs, two tortoises and two pigs!

Jeandre hails from South Africa’s Northern Cape pioneer town of Kimberley. Having grown up on a farm, Jeandre was a keen sportsman but an injury led him to take a keener interest in music, first starting out behind the drum kit. Then, an epiphany occurred- having watched Mark Knopfler’s ‘One Night in Rome’, he swore then and there that he was going to master the guitar. Having matriculated from school in Kimberley, Jeandre followed his passion to Cape Town where he studied guitar. Jeandre is now one of the best young guitarists in South Africa with an impressive CV performing shows (including Arena tours) with virtually all of South Africa’s top artists including Karen Zoid and Francois Van Coke. Jeandre’s on-stage energy is infectious. As well as performing with Me and Mr Green, Jeandre sells top-end guitars at Music Experience in Cape Town and in his down time loves nothing more than a solid game of FIFA on the Playstation where he claims to be at least in the top 100 players in the country!

Have a look a at just some of the songs that could be incorporated into a ME & Mr Green set!

Thanks so much for an awesome gig ….. I have hosted the Finals for the past 10 years and you guys were the 1 st ever entertainers to get the crowd off their chairs and rocking !! Young and old could relate to your music and the feedback from the guests has been overwhelming positive …… so , well done to you and Tony ! Sanlam Corporate Event – Sun City – Gary Van Loggerenberg – Sponsorship Manager

“You two were a hit! The best band/DJ we’ve ever had! You guys rock! You won’t believe how many people came to me, saying: best band ever!” Citadel Financial Services – Corporate Bash

Dear Band! I wanted to thank you again for the great job you did at the concluding party of my 60th in Avignon last June.  Your performance was outstanding and initiated lots of compliments from many of my guests, they really appreciated your music and show, as did Jenny and I! Your huge positive energy pulled the crowd on the dance floor and contributed greatly in making this last evening a great success that will last in everyone’s memories! Wishing all the best for the future and looking  forward to working with you again.  With my very best regards to the three of you, Hugo. Dr Hugo Banziger – Partner of Lombard Odier Swiss Private Bank and former Chief Risk Officer of Deutsche Bank Worldwide – Birthday Party, Avignon, South of France