Riaan Manser – Inspirational Adventure from Speakers Inc. The epitome of courage and determination, Riaan Manser has re-written the definition of tenacity over the past ten years.

Riaan rose to prominence by becoming the first person to cycle around the perimeter of Africa. For over two years, alone and unaided, Riaan pedalled a staggering 37 000 km’s through 34 different countries, some of which rank as the most dangerous countries in the world.

His achievement earned him the title: ‘Out There Adventurer of the Year 2006’ and his book, ‘Around Africa on my Bicycle’ became a best seller.

Riaan experienced imprisonment (during his journey) in Equatorial Guniea and he was held captive by drugged teenage rebels in Liberia. On both occasions, he secured his release through his charm, amicable personality and exceptional powers of persuasion.

To add to his achievements, Riaan Manser – Inspirational Adventure Speaker climbed Mount Kilimanjaro and descended to Lake Assal, the highest and lowest points on the continent.
On seeing Riaan’s story on television, Nelson Mandela personally requested a meeting with Riaan, saying it was: “a performance that will inspire the youth of the continent”.

In July 2009, Riaan set another world first when he became the first person to circumnavigate Madagascar, the world’s fourth largest island – by kayak – alone and unaided. Follow Speakers Inc on Twitter

This colossal journey, which saw Riaan paddle 5000 km’s in eleven months, was, he said: “considerably more demanding, both physically and mentally”. He had to conquer extreme loneliness whilst enduring treacherous conditions like pounding seas, cyclones and unrelenting sun, which combined with salt water, almost pickled him alive.

In March 2011, Riaan Manser – Inspirational Adventure began his next challenge. This time, he took on mystical Iceland and her arctic waters with a partner, Dan Skinstad, who has mild cerebral palsy. ‘Around Iceland on Inspiration’ saw the two paddle 2300 km to circumnavigate Iceland in a double sea-kayak over a five month period.

Landings were another of the pair’s biggest challenges. Approaching rocky shores that are being pounded by wind and surf is a hazardous business. Between timings and luck, you’re a second away from disaster at any moment.

Their landings were made even more difficult because of their ‘sea legs’ which they’d developed after a long day’s paddle of 8-10 hours. Often, even the softest landings would result in Riaan and Dan spluttering and crawling for a few moments on the black sand on all fours, after tumbling out of the boat during their landing.

As the long days of summer arrived, the pair began paddling through the night. This proved to be a successful strategy, although it messed up their sleep patterns.

“The sunlit nights in Iceland bring calmer winds, so we have been paddling at night quite a bit. It is really surreal to be able to see clearly throughout the night, to listen to the night sounds and to observe the misty night scenes of Iceland”.

On the 5th of September 2011, after 147 paddling days, blistered and aching, they arrived back at their starting point, their circumnavigation complete.

Thousands of people from blue-chip companies to community projects and from schools to non-governmental organisations have been moved by Riaan’s extraordinary (and often hilarious) tales of perseverance and unrelenting resolve.

Riaan speaks passionately about his adventures, motivating and inspiring all who attend.

Riaan speaks passionately about his adventures, motivating and inspiring all who attend his presentations. A talk that incorporates true courage, perseverance and the right attitude to effectively lead in adversity. 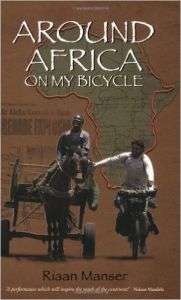 Cycling an average of 90km a day, often in extreme conditions on badly-maintained gravel and sand roads, being thrown into jail in Equatorial Guinea by aggressive and drunken border police, and facing possible death when taken hostage by drugged Liberian teenage rebels may not be a conventional idea of truly ‘living’, but, in September 2003, Riaan Manser – Inspirational Adventure rode out of Cape Town, determined to become the first person to circumnavigate Africa by bicycle. He thought it would take him a year – it took him over two.

At the end of 2005, he cycled back into Cape Town, 14kg lighter and having covered 36,500 km through thirty-four countries.

In the last five years Riaan Manser has re-written the definition of tenacity and become the epitome of determination. Riaan rose to prominence when he became the first person to cycle around the entire perimeter of Africa. For over two years, he pedalled a mammoth 37,000kms through 34 countries; some of which rank as the most dangerous places on Earth.

It was a feat that earned him the title Adventurer of the Year 2006 and made his resulting book, ‘Around Africa on my Bicycle’, a best-seller. In July 2009 Riaan Manser – Inspirational Adventure again set another world first when he became the first person to circumnavigate the world’s fourth largest island of Madagascar by kayak; another expedition achieved alone and unaided.

South Africas best-known adventurer Riaan Manser – Inspirational Adventure takes on his toughest and coldest – challenge ever, to kayak around Iceland accompanied by Dan Skinstad, who suffers from mild cerebral palsy.